You are here: Home / Portrait of a village

Portrait of a village

Flowers, Tomatoes these are Belton’s claim to fame

Although it lies in open country intersected by lines of elms striding across the fields like cockerels, the village of Belton remains hidden from the traveller who approaches from any direction but one until early upon it.  The only clue to the existence of a community of over 1000people is the round  flint church tower that stands overlooking the parish like a lighthouse. 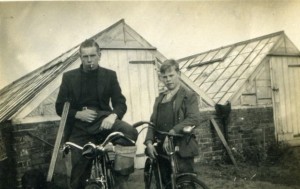 The glasshouses on Beccles road behind Pansy Villa 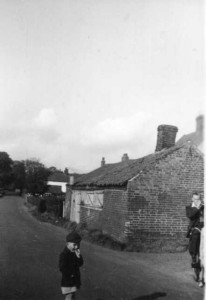 The Smithy shed on Beccles Road

The prettiest and most open approach is from the Gt. Yarmouth – Beccles  (A143) road to the South east. As you come nearer this tree – girt village, the distant grouping of buildings resolve themselves into a cluster of neat cottages by the roadside, a Smithy shed, an 18th Century farm house with impressive buildings on the left and another farm and a barn which by its brick and thatch construction and its proportions suggests an old tithe barn on the right. At the back on its eminence stands the Church and behind the houses by the roadside are extensive glasshouses. there is little that is remarkable about the appearance of the village. It is ugly and strictly utilitarian some inhabitants will tell you. On the contrary, say others there are plenty of picturesque little corners in Belton. It is difficult to disagree entirely with either point of view. there are in fact several quite distinguished buildings, reminders mostly though not entirely of the past. There is Belton Old Hall, a mellow 18th Century manor house. The Railway Tavern  with its steeply pitched thatched roof and timbered frame is a piece of real old Suffolk work. What is reckoned to be the oldest building in the village is another in a similar style locally known as old Dame School, now occupied by a Doctor. Its rather attractive countenance would be all the better for a touch of make – up.

On the out-skirts of Belton there are several farmhouses dating back to the 18th Century with accompanying barns and buildings and in the village itself  are a good many smaller cottages in glowing red brick  with pantiled roofs and classical doorways in that pleasant style to be found scattered all over Norfolk and Suffolk. Not quite so good looking but impressive enough are numerous early 19th Century villas often roughcast, all very tidily kept and well painted usually occupied by retired people. Lower in the scale are the rather larger houses built of ugly  red brick in a rather pretentious style that betrays the complete freedom from the guiding hand of a trained architect in their design. The village also has several drab Victorian terraces of dwellings,  which neatly kept and well painted as they are can only be describes as “accommodation – units”.  There  is a splattering of bungalows, permanent and not so permanent, and a number of R. D. C. houses.

Belton rectory in the early years of the 20th Century.

A Dutch influence is apparent in some of the older farms and also in the new Rectory which replaced an old that was burnt down in 1934, and is one of the new really modern and up – to – date clergy houses in the whole of the country.

The village consists of a single road running approximately in a circle for about there – quarters of a mile in diameter, from which several spokes, one going towards Bradwell and another towards Burgh Castle, and one or two going nowhere in particular. I fancy that when you go to see a neighbour most Belton people pause slightly to decide whether to turn left or right, so as to take the shortest route to their destination.

New paint and clean curtains are a feature of Belton as they contribute to the undoubtedly prosperous air that hangs over the village.

Belton’s prosperity lies in its thriving and productive agriculture, which is a rather specialised type. Although there are dairy and arable farms around, Belton’s claim to a niche of fame in the markets of England lies in its intensive  market garden and glasshouse cultivation. 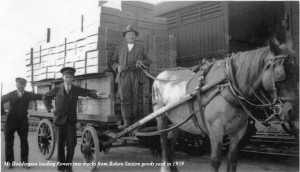 From the Church tower you can view the whole parish and everywhere the shining roofs of the glasshouses are to be seen glinting in the sunlight. It is in these glasshouses that are grown the two crops that the village has had more than local fame  – Chrysanthemums and tomatoes.  The flowers find their way to the markets of the North and Midlands,  as did the tomatoes until the pool scheme deprived them of their identity and submerged them into anonymity, the two crops were transported via train from the local railway station to either London or the Midlands.

At one time there  was another important glasshouse crop the cucumber, but this received a setback during World War II and did not fully recover, and there are only one or two people still growing cucumbers  for market on any scale. 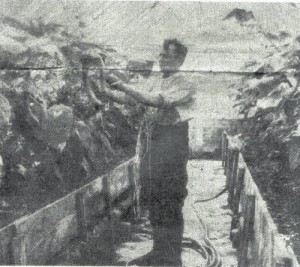 Mr F. Botwright tending the cucumbers in the glasshouses at Pansy Villa in Belton

In days past, too, Belton was noted for its strawberry beds, but these were uprooted during the war to make way for essential foods. However last summer one farmer made a considerable comeback with strawberries.

nearly all the working population of Belton certainly most of the men are engaged in agricultural pursuits, either on the land or in the glasshouses, and if there has been adrift into the town of Great Yarmouth by the younger generation it has been by the younger women, who crowd the early buses and trains to go to jobs in the factories and shops in Great Yarmouth. A few young girls however still work in the glasshouses.

Not more than half – a – dozen men nowadays – far fewer than in former years go to sea. Others work in the local bakery and on delivery vans, and at the railway station. 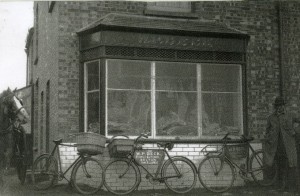 Belton Village Butcher on St. Johns Road, in later year this building was the Doctors surgery.

Because the pleasures of Great Yarmouth and Gorleston – on – Sea are within easy reach the organisation of entertainment in the village presents some difficulty. The older residents have initiated activities of their own in the village, but for the younger generation entertainment normally means a trip into either Great Yarmouth or Gorleston either by bus or on bicycles. The youngster usually go off in parties at about 3 o’clock on Saturday afternoon and not returning until 11 or 12 o’clock at night. 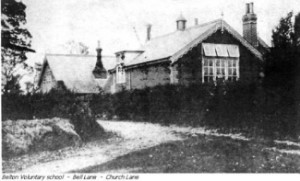 A travelling cinema visits the village once a week (Can any one remember this) an innovation that is regarded with some concern by the staff of the village school up on the hill, for one result of this has been that school – children turning up with toy guns and ideas of violence..

The school by the way not over crowded, is housed in a condemned building, and suffers from the disadvantages of not having been reorganised. Belton teaching opinion  is that the school is rather to far from Ipswich to be remembered, and that it would be more satisfactory to be administrated from Great Yarmouth. About half of the pupils have dinner at the school the meal is served in the pavilion of the sports field.

The sports field is one of the achievements of post – war Belton, which raised £1000 and got a grant from the Ministry of Education of £500 towards it. It lies high near the Church and is well drained and fenced in, at the moment it is marked out for football and netball, a bowling green is under construction.

The men’s social activities are divides between the football club, the British Legion and the bowls club. Bowls seem to have been a long standing tradition in the village. Opposite the rectory is a triangular piece of land, now the site of a rather large house and garden, which history has it was the site of the village green before the enclosures of the 18th Century. Major H. C. Gowen who lives there, tells me he has little doubt of this, because once a year  the bowls club claim the privilege of playing on the lawn of the garden. Moreover, the house in the road at the back are addressed “the Green”. 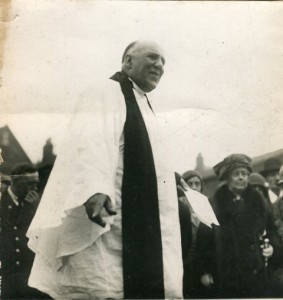 There is little organised sport for the women or girls of the village. There is a Tennis club and some netball, there is no local branch of the Women’s Institute and Belton women join the Bradwell W. I. The parish church under the guidance of the rector. (E. W. Alexander) last year organised a quite capable coral society of 40 people. It is in suspense at the moment, but is to be revived next year. For the younger people there is a youth club and a scout group.

Belton is described by newcomers as a village where people all “muck in ” well together and where it is easy to raise money for a good cause. Two fetes held within a fortnight of each other in two successive year each raise well over £100.

If the informal community sprit is strong that of the official variety is on the weak. It was recently found difficult to get sufficient numbers to form a Parish Council, although the problem has now been resolved. On the other hand there is al strong feeling of locality and tradition, recently a new sign post was erected reading “Goffin’s Lane” a name by which the land had gone by in the past, but in deference to protests in that thoroughfare and from others, the sign was removed and replaced with the more familiar and, it was held a more fitting title, “Sandy Lane”.

My favourite story about Belton has to do with the hospitality to be found there. A Gorleston rounds – man telling me how he found country people more friendly than townsfolk, said that when he called at a certain cottage in the village the lady of the house always gave him a cup of tea, and said “and” he said “if when I call she was not at home, she leaves the kettle on the hob with the teapot warming by it, and a cup with some sugar, tea and milk so I could make a cup of tea for myself.

The above story was taken from the Great Yarmouth Mercury dated April 28th 1950, and in no reflects the village in the 21st Century, which has changed in so many ways from that date.

by Kim Saul on 26th August 2014 in Local interest, Memories