You are here: Home / So you think we live in hard times ?

So you think we live in hard times ? 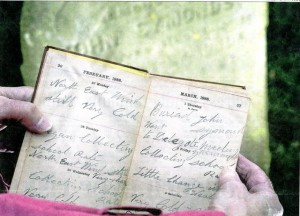 The diary of a grave – digger in the 19th Century

Read the diaries of a grave – digger from February 1888.

The above are a brief observation of a man who may have gleaned his education from the good book and for whom one arduous day must have seemed very much like any other. Local history enthusiast Jean Samuels, the faded pencil written diary entries of grave – digger Robert Pole has provided a fascinating glimpse into the past of Belton. Since being given the three hard bound diaries by a family friend Mrs J. Searby, the widow of a direct descendant of Mr Pole . Mrs Samuels has pored over the daily entries from 1888 to 1890and pieced together a picture that contrasts harshly with the way we live today.

She said: “His hand writing and spelling were not good, but if you persevere you can get a real glimpse of his hard life, working six days a week, with Christmas and Whitson holidays the only days off other than Sunday”. For a man working outside as a grave – digger and grounds man at All Saints Church the weather was clearly important.

The severe winters of the time are reflected in his entries. 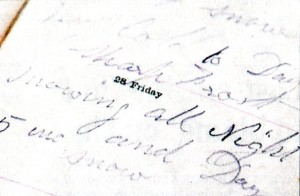 Mrs Samuels, a delivery van driver said “Robert sometimes calls a storm a tempest which suggests that he may have been learning to read using the Bible. Mr Pole who lived to the age of 82, despite his hard life, meticulously recorded all the village deaths and burials for which would have been paid by the families. The list reveals that 16 children died during those three years. “infant mortality would have been high, as there were no antibiotics and no immunisation, in the Summer of 1888 records show that he appears to be burying a child every two weeks”. 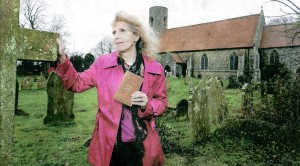 The diaries also show how many and varied tasks Mr Pole performed to earn his crust, (money) from ploughing “plowing” as he puts it – to collecting rent , the entry for April 6th 1888 records: “John Skipper half year rent due for cottage Paid £2. left due 12 shillings and 6pence (Sixty two and a half pence). He also collected the school rate – a penny a week that parents paid for their children to attend the Church run school.

From a terse comment on October 26th 1889 “Rose Burrage killed on line (see as lucky as a sweep can be) – the only pen – written entry in the diaries, a reflection, most likely of the tragedy’s momentous impact.

Mrs Samuels researched the suicide of the unmarried, pregnant woman and discovered that her own family was involved in the story. She explained “During that era woman in those circumstances would have been ostracised, and she had not even told her father. The baby was born as she lay dying on the track, and my Great – Great Uncle Jacob Saul who worked on the railway as a plate layer, heard the baby’s cries and helped rescue him. The infant Reginald Burrage, whose place of birth was recorded as being “on the Great Eastern Railway” was taken in by a family and went on to live into his 80’s. 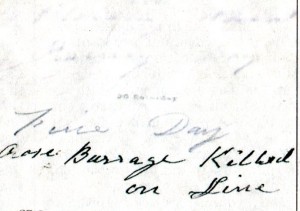 But the abiding impression Mrs Samuels gains from the records is of the hard, uncompromising way of life of the time.

Our thanks to Mrs Jean Samuels

Previous Entry: Portrait of a village
Next Entry: Village row over disused school