You are here: Home / A history of Belton Church

A history of Belton Church 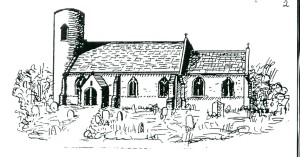 Until 1880 the church had a thatched roof which had fallen into disrepair. Major fundraising gathered in £436. 0.0. So allowing the roof to be replaced. Around this time the chancel was pulled down and rebuilt in its present form. The interior furnishings were also renewed during this period. Up to this time a 3 decked pulpit with sounding board above and the clerk’s seat beneath, had stood in the middle of the South side of the church, and all the pews, which were high but regular, faced the pulpit so that the congregation in the middle of the church faced each other. The organ, a grinder with 60 tunes was on a platform in the chancel arch and there was a gallery at the west end of the church for the choir. In the chancel stood 2 large square pews and 2 low desks which had no doubt been used for schoolchildren. Between 1848 and 1887 all this was altered. The pulpit was placed in the Southeast corner of the nave and is cut down in size and the sounding board removed. All the pews were moved to face the east. Later the oak pews were replaced by oak seats, and a new pulpit and reading desk were purchased.

The organ gallery was pulled down and the choir were placed in the chancel. The new organ was built by Mr Mack of Great Yarmouth for £100.0.0 and placed in the west end of the church. Ironically it was moved to the south east corner of the nave early this century, but then moved again to the west end so as to no longer obstruct the view of the alter.

It was in 1849 that the present Purbeck marble font was restored, its broken pillars being replaced, and while this work was carried out the old Saxon (or Norman) font was discovered beneath the present one, it was being used at the time to catch water from the pipe connected to the font.

The present shape of the church was completed in 1887 with the erection of the carved oak reredos which is divided into 3 panels depicting, the Annunciation, Crucifixion and Resurrection. This was the work of Mr James Elwell of Beverley in Yorkshire at a cost of £135.0.0.

The east window was given as a memorial to the late reverend Thomas Howes, who was the rector of Belton for 58 years it is named “The Vine and Branches” and depicts Christ, the true vine, his Saints, and the branches, an appropriate theme for the church which is dedicated to All Saints.

Above the south door there is a copy or Titian’s picture “The last Supper”.

The fresco wall painting as seen on the north wall was common in churches of the 15th century. This one was probably painted in the reign of Henry IV (who died in 1413) as the costumes are of that period. It represents the legend of “the 3 Quick and the 3 Dead” 3 mounted knights arriving at a wayside cross are met by 3 skeletons who lecture them on the pomp and vanities of the world. The first horseman has a label in his mouth saying “0 benedicter, what want ye?” the second says “A wondrous sight is that I see” and the third says something ending with “…….will I flee”, and he is turning the horse away. The fresco was painted over a large picture of St. Christopher so that only the feet and legs of the Saint remain surrounded by fish.

On the same wall is a large fresco of St. James. The paintings were uncovered in 1848 but have faded a great deal.

Belton is the resting place of John Ives, the Historian, who wrote “The history of Great Yarmouth”. He died in 1776 and a plaque on the north wall commemorates his life.