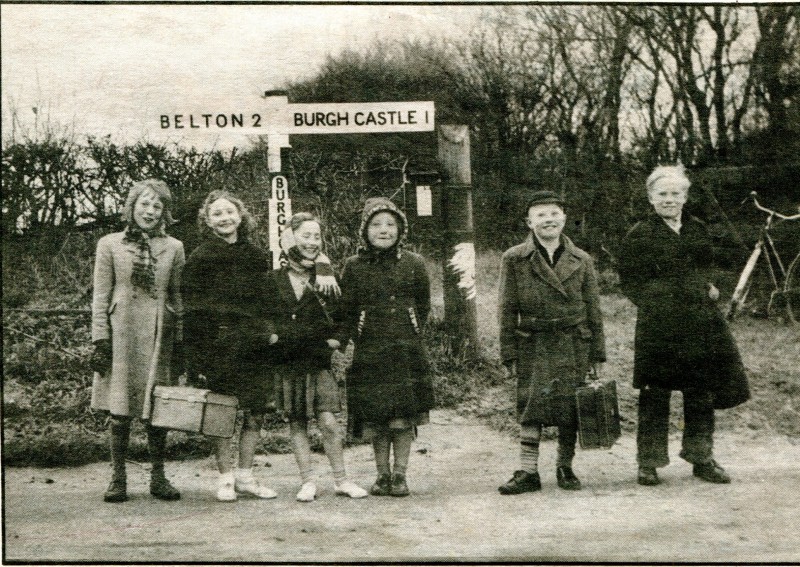 In the Scarfe is Nora Haggett of Manor Road Gorleston, with her sister and friends. note the cases for carrying ginger pop and buns to sustain the walkers

On Good Friday Children from all over Gorleston & Gt. Yarmouth used to make the long trek to Burgh Castle to pay homage to Old Mother Brown. The picture above shows some of the Children who made the Good Friday pilgrimage in 1958 with just one mile to go. Clifford Temple who used to live in Nelson Road North vividly remembered those trips and said that his parents also used make when they were youngsters. I remember one time when I was Six year old we set off in hordes along Southtown Road. The trek never seemed to tire us out even though it was a long way. The children used to have skipping ropes  stretched across the road and we would jump (Not possible today due to the volume of traffic) nearly all way to Burgh Castle. We would only stop when a pony and trap came along. Old Mother Brown’s house was a thatched cottage with a large garden and on Good Friday she would set up chairs and tables for the children to gather round, he said. Hard baked rice pudding and glass dishes filled up with cut up lemons to add sugar to for lemon juice drinks were then brought out for the children. “It seems strange to think of it now but nobody really knew who she was but we would all go round there on Good Friday,” he said