Friendship and Generosity keep pub at the heart of community

The Railway Tavern in Belton

Faced with changing customer habits, many traditional inns are being transformed into gastro – pubs in order to stay in business. As a result is, in part, why walking into the Railway Tavern in Belton near Great Yarmouth, feels like stepping back into a truly traditional community pub. It has been an inn since the mid-1800’s and without making any drastic changes to what is on offer, it continues to attract the locals and stand its ground as a village pub.

Current Landlady Vicky Applegate took over the lease in 2007. before returning to the village where she was brought up, Miss Applegate ran the Norfolk Tavern in Gt. Yarmouth. For her, being a publican is a busy, but fulfilling, career path, “My mum used to work here years ago when I was little,” she said.

And I knew about the history of the pub and the “Belle of the East” (See The last flight of the Belle of the East) because my Nanny was one of the people who helped saved the pilots when the plane crashed.

Back in August 1944, a Liberator from the US 8th Air Force based in Rackheath crashed in the village near the Railway Tavern after returning from a raid in Germany. A plaque outside the pub commemorates the moment which shook the quite village and saw locals rally round to help the crew, some of which managed to parachute to safety before the plane crashed into a plum orchard.

Miss Applegate – whose Niece is the gold medal winning Paralympic swimmer Jessica – Jane Applegate – said tradition is what keeps Tavern going, I didn’t change too much when I came, its like someone’s home, you  don’t change things if they like it that way. 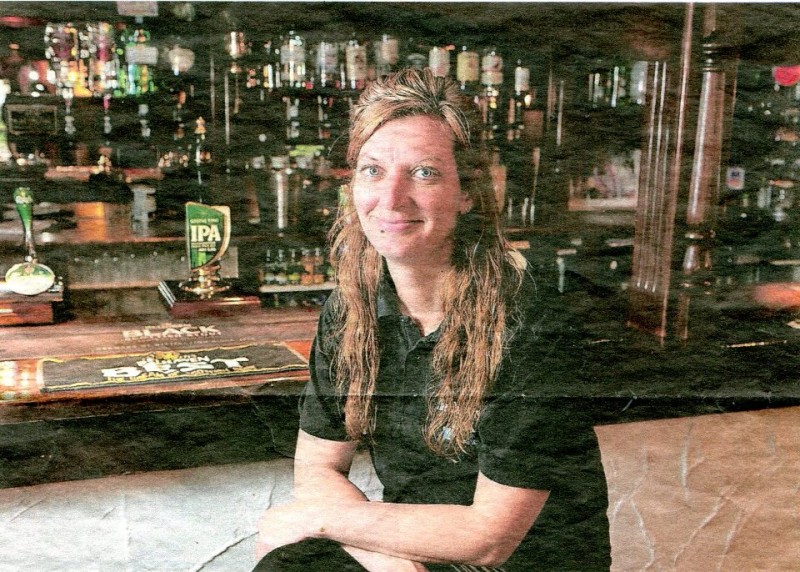 The Tavern has a darts team, holds regular quizzes, a marque for summer functions and every weekend welcomes Sunday football team, followed by “wives, girlfriends and children” who pop in to meet them. If any one is peckish they can order from the neighbouring fish and chip shop. “I think they come here for the friendship” said Miss Applegate. The people who come in here would do anything for anyone. It’s an incredibly generous and giving community

Pub has a proud history – and a few ghosts

The Railway Tavern has been a watering hole in the village of Belton since the mid 19th Century. Records, which have been collected by the Belton & District Historical Society, show the Landlord back in 1851 was a James Bracey aged 44.

At the beginning of the 1800’s Belton was described as a ‘small scattered village in a picturesque dell, opening to the vale of the Waveney’. Farming still involved strips and furlongs on the open fields as it had been done for hundreds of years. The population of the parish was about 350.

By 1900 Belton boasted a post office offering “a full service” from money orders and telegrams  to express delivery parcel post and a savings bank. Tourists came to the Belton Gardens, located near the villages other pub “The Kings Head” and there were novelties such as oranges and other fruit grown under glass

By the turn of the century  the Railway Tavern was a fully licenced public house. While the 18th Century building long pre – dates the railway from which now takes it name – it is not known what the beer house was previously called. Through the years more than half a dozen landlords have pulled pints at the Tavern, which was taken over by locally raised Vicky Applegate in 2007. She along with today’s locals, are well aware of the pub’s long history – not least because of visits from ghost hunters. They told me they’d seen a little girl and one of the old landlords as well as a woman from the railway which used to pass close to the pub.