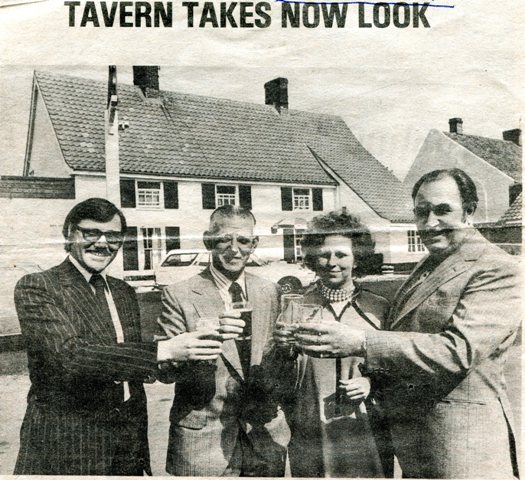 Toasting the success of the new – look Railway Tavern are from left to right:

and Muriel and Neville Rogers

The Railway Tavern public house in Belton, well known by locals and visitors alike has been officially re-opened last week(this is taken from the Eastern Daily Press on 24th September, 1979). After an extensive alterations programme. The work which lasted five months was carrier out jointly between tenants Neville and Muriel Rogers and Norwich Brewery.

The drinking area has been almost doubled in size by knocking through an adjoining building, a new bar and bar fittings have been installed and new carpeting has been laid. An area of the bar has been set aside for the many dart players who use the Tavern. The pub has three teams, two men’s and one ladies, playing in the Norwich Brewery League.

There to officially re-open the pub by pulling the traditional first pint was John Noble chairman of the licencing bench. He was introduced by Gerald Tooley, The Norwich Brewery district manager. Mr Tooley said “I am sure everybody will join with me in congratulating Neville and Muriel on the tremendous results they have achieved at the Tavern. I am sure that their hard work and efforts will be appreciated by the locals and many tourists who visit the area each year.”

The Tavern was their first pub which they took over in 1961 although Neville Rogers has know it for a clot longer as it used to be his local! One lunchtime on hearing that the landlord was leaving Neville wrote to the brewery asking if he could be considered for it. Before that Neville had worked as a fitter on a farm.

When not serving behind the bar Neville turns out for one of the darts teams, and he also enjoys clay pigeon shooting. Neville passed away in 1989.

by Kim Saul on 1st September 2016 in Local interest, Memories