You are here: Home / Veteran’s delight over receiving rare medal 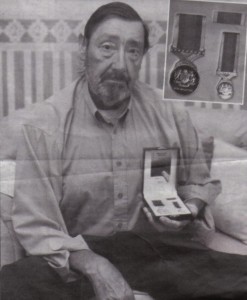 Mr Denis Broad with his service to Malaysia award

A veteran has received a rare medal in honour of his efforts in helping an Asian country to preserve its territory.

Denis Broad of Amhurst Gardens Belton has been awarded the Pingat Jasa Malaysia (PJM) medal, which means “service to Malaysia award” in recognition of his help during the Malaysia – Indonesian confrontation.

The war between the two Countries took place between 1962 and 1966, and the medal was given to anyone who served until the end of 1966, which includes some of Mr Broad’s service, as he arrived in February 1966.

He said I am very proud to be honoured in this way, “I never expected it”.

The 63year old who originally came from Stoke Newington in London served as an NCO in the Royal Military Police and was responsible for maintaining order among British Soldiers based in the Malaysian province of Sarawak, particularly in the evenings when they went out drinking.

His remit also involved other matters affecting military personnel, and the military police provided assistance to the local police force.

But he did not see much military action during his service with the 99 Ghurkha infantry brigade, which returned to its base in Singapore at the end of 1966 before heading to the Malaysian province of Brunei and Sabah, where he served until 1972.

The nearest the father of three came to confrontation with the Indonesian army insurgents was when they got within a mile of his base at Kuching in Sarawak, but he was not involved in the fighting.

He said “We were all fully armed while we were there. We never went anywhere, there was a curfew and we had to be back by a certain time.” The conflict erupted because the then Indonesian president Sukarno was concerned Sarawak, Brunei and Sabah, which had previously formed the Country Borneo, were going to become part of Malaysia following the end of British colonial rule, which he regarded as a British “puppet” state.

Following his time in Malaysia Mr Broad was posted to London, Northern Ireland Germany and Holland before he was discharged from the Military Police in 1984 following 22 years of service for which he received a long service and good conduct medal from the British Government and a general service medal.

He married his wife Tambong who comes from Borneo while he served in Sarawak, and the couple have three children, daughters Catherine and Samantha and son Richard, who works in Angola.

A representative of the Malaysian Embassy in London presented Mr. Broad with his medal and a plaque at his home in May 2007.