You are here: Home / Snap sure went a long way

Snap sure went a long way 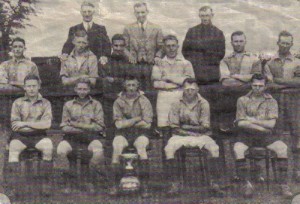 The men in this photograph may have been playing for a local team, but the photograph has been across the Atlantic Ocean and back again.

It was sent by Tina McDonough (née Middleton) from Reading, Pennsylvania in the United States. While she was visiting her long lost relatives in Bradwell.

The snap shows members of Belton football club for the 1938 – 39 season, and Mrs McDonough’s father Ernie Middleton is seated on the bottom row on the right.

“Dad was born at Stepshort, Burgh Castle. He married my mum, an American lady that he had met while serving in the Royal Navy during the Second World War” said Mrs McDonough.

The couple stayed on in America after the war, only returning to this area for about 4 years in the late 1940’s. After moving back to America Mr. Middleton was killed in a car crash in 196, after which Mrs McDonough lost touch with her family in England.

Little did she know that her cousin Michael Harvey, of Bradwell had been thinking of trying to track down her side of the family? In April 2000 they were reunited after Mr. Harvey contacted his cousin’s local paper “The Reading Eagle”. They finally met in October when Mrs. McDonough visited England bringing with her many of her father’s old photographs that were taken here, including this one.

Neither she nor Mr. Harvey knows who the other team members might be.

“We thought the interesting thing was the story behind how the picture came to be back here after spending much of its life in America” said Mr Harvey.