You are here: Home / Murder before Breakfast

As told by Anthony Cotterell

Jack Saunders went home yesterday. He does not want to work on a lightship any more. He wants a job where he gets a gun. Moreover, this is why:-

It was early on a stormy miserable north sea Morning in 1941. The East Dudgeon

Lightship was riding a swollen swelling sea, Jack Saunders 5ft 9ins and 12st 6lbs had just come up on deck to take his turn in keeping watch with young George Jackson.

They were great friends these two

After a few minutes, they heard aeroplane engines. Then down out of the clouds came a Heinkel bomber and swooped just over the masthead. Even then, they weren’t terribly alarmed for Nazis had sometimes flown over their ship before and waved a greeting.

But when it circled round, they ran for cover under the after-part of the deckhouse. George Jackson and the three others of the crew had seen this happen before.  They knew what was probably coming.

Sure enough a burst of machine-gun fire came. The German came over a third time and dropped a bomb.

Seeing the way it fell made for shelter in the bows.

One of them Bell, was a sick man, but the skipper had to order him to get dressed and standby.

The plane circled round and dropped another bomb then a salvo of four.

It was murder, crouching there in the bows with not even a shotgun to defend themselves with.

And the German was getting near, his seventh bomb dropped no more than 10yards from the ship, the eight smashed right through the port lifeboat and exploded under the stern.

She jumped almost clean out of the sea, and as she wallowed back, they found themselves waist deep in swirling, icy water.

The deck rail went overboard, and all the glass in the big lantern started rattling back. The ship was listing badly to starboard.

They stuck at it for half an hour, and it was obviously no use trying to stay any longer.

They ran for the remaining boat and put off.

The Nazi circled round three or four times to make sure they weren’t going back to the ship, and made off in a Northerly direction.

Then they pulled back and young George Jackson went onboard to get the lifeboat equipment box and emergency stores.

They were wet and freezing cold, but very hopeful. They didn’t talk much.

Someone started singing “Roll out the Barrel” – and someone else told him to shut up.

The skipper Mr George was a tough compactly built man of about fifty-four was at the tiller. His plan was to run for the Humber, and his job was a difficult one: for with the seas that were running they were in much danger of being swamped, if she got broadside on to them.

As it was, two men were kept bailing at all times.

Sanders and Bert Rumsby were pulling, and the other three were up in the bows.

Bell was too ill to do anything. He had been seasick ever since he came onboard the Thursday before. Sanders didn’t even know his name until the police told him afterwards.

They were a very nice crowd, said Jack Saunders.

Herbert Rumsby was very quiet but nice. About forty – five, I suppose. Harry Davis, one of the jokiest  man you could wish to be with, a man nearly fifty, I’d been shipmates with him before – nine years, I’ve been in lightships  – and Bardolph Boulton too he was a nice chap, about forty – four, I think.

“Then Dick Norton, he was a good old sort, must have been about fifty – four. I lived alongside him in Gt. Yarmouth, for two years.”

It was almost about two hours before they lost sight of the ship. They were glad to do that, for it meant they were getting somewhere.

Shortly after that, they sighted a trawler. A wave of life swept over them. They tied a blanket to the oar and hoisted it.

They burnt some flares, hoping they would see the smoke. Pathetically they shouted, but the trawler did not see them and passed on.

“When she’d gone it took a bit of the go out of us,” says Sanders.

They got out their rations bully beef and biscuit.

Bell the sick man asked for a drink of water, but the bung had got knocked out of the keg and the water had al ran away.

They didn’t feel much like eating; they were too busy watching the horizon.

It began to get dark. Harry Davis took Jack Sanders’s place at the oar. It was the first break for Sanders that day. He began to nod.

But after twenty minutes, Davis had to give up; he was too tired and frozen to go on. “Sanders said well get back old chap,” gave him a slap on the back and he fell back into the water in the bottom of the boat.

They went on paddling. The worst thing of all was the darkness.

They were beginning to reach their limit. They had been rowing in heavy seas all day and most of the night. The skipper ordered them to put the anchor over. They did; it touched bottom and they knew they must be somewhere near land.

They should have been warned by the sound of the breakers, but they were drowned by the heavy surf, which had been chasing them all day long.

These white tops were to be their ruin. A cross currant caught them and three great waves came smacking down.

They jumped to right the boat for the first time “start bailing out” shouted the skipper.

“But before we moved the second one struck us” says Sanders “’we’re on a shoal, skipper’ I heard young George Jackson shout. The third one simply upped the boat and threw us all out into the water.

You could hear the chaps shouting to each other. One man had hold of the back of my lifebelt. Next minute a wave came and lifted him right over the top of me.

All I could do was dog paddle. My legs were dead. All I was thinking was to keep my back to the surf; otherwise, you got a swamping mouthful every time a wave broke.

“The others were gradually drifting away from me. I could just see black dots for their heads, but the night was to dark to see more than a few yards”.

“It seems an hour and a half we were in the water; probably more like three-quarters of an hour. Time seems so long when you are suffering.”

“Then I felt my knees touch something (I could not feel anything with my feet) I was on my hands and knees in the water, but I couldn’t realise I’d struck shore”.

“I crawled forward out of the sea and up the sand I wanted to get as much distance between me and the water as possible. I wanted to lose the sound of the surf.”

“I yelled shouting ‘Hello’ all the time. The others yelled too, but after a while, I couldn’t hear them”.

“I thought I was on one of the bird sanctuary islands where no one goes but once a year.”

“I carried on crawling till I saw two beach huts. I was too done in to find the door, but I knew it was somewhere”.

Actually, he was on a small East Coast town. However, on that night the sand dunes where “crowds flocked to watch the sunset” seemed to this cruelly battered man to be great mountains of black rock. The pleasure beach was a savage windswept shore.

His seven friends crawled a few yards up the shore and went to sleep. They were found next morning in a sad quarter mile line along the shore – dead.

However, something drove Jack Sanders on to get help. He dragged himself through gaps in the dunes, down across 200yds of rough wind-slashed ground, through a gate, up a path and round a corner out of reach of the wind.

I traced his path a few mornings later. How he had the strength is a miracle.

Next:  “I fell forward. My hands went through a window. I couldn’t feel the cuts. I pulled more glass away with my hands and slumped down.

But it was only an outhouse. He fell back in a faint. If he had slept he would have died, but his lifebelt was keeping his neck strung up so that he couldn’t sleep.

He staggered across the path and rattled the gate … then on and up some steps, and threw himself in a last effort against the door at the top of them.

And by some tremendous stroke of luck he found himself in a room used for storing blankets. Far gone as he was, he struggled for more than  an hour to get out of his clothes; then buried himself in the blankets and slept fitfully until 7:30 am., when through the window he shouted to young wally Turfitt.

At 10 am, when Mr Jack Manning the local Daily Express man arrived, Sanders was talking freely, but still dazed.

The Doctor allowed him bacon and eggs. Then Police Sergeant Connor took him to the police station, where Mrs Connor has been looking after him ever since.

He is still very weak. He can’t use his swollen fingers properly yet.

But his main trouble is mental, “It’ll be a long time before I can stop thinking about of those seven men, 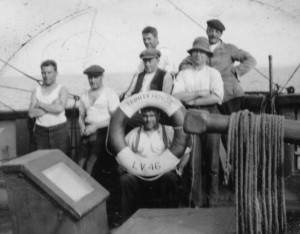 The seven members of crew who lost their life on that fateful Morning in 1940.