You are here: Home / Memories of Belton School 1967

Miss Meadows :           Who married and became Mrs Hill – This was a stepping stone to a future career

Who lived next to the school, to the right hand side. He used to stoke the coke burning “pot – bellied” stoves which used to hear the classrooms in winter. Each stove was surrounded by a metal fire guard on which we could dry our rain soaked coat. It was also used to dry our wet shoes, socks, wellington boots, etc.

Mr Coleman would dress up as Father Christmas and give each child in the school a gift, usually a book and a handkerchief.  He was generally thought to be quite stern & strict.

Mrs Doddington was a lovely lady with a sweet heart.

An all round good – egg who would us go & play rounder’s on the Bell lane field almost every sunny day. He would read a story at the end of every day, we always enjoyed his class. The sports day & summer fetes were great fun.

We had toilets outside, which had no plumbing, Mr Coleman used to empty the “chamber pots” inside every so often.

The coke for the stoves was kept on the upper school playground, tucked around the back and retained by a small wall.

We had “blackboard easels in every classroom, small sinks at the back. The cloakroom was small dark areas with small sinks, pegs & shoe racks between the upper & lower school rooms.

The main hall had a partition wall which could be opened through to the needlework room, for special occasions the parents could sit and watch the end of school plays, Christmas plays, such as “The Toy Shop”, umpteen Nativity plays, “The Tinder Box” Etc I remember. 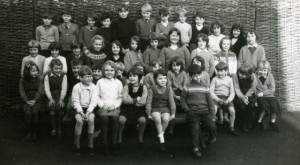 This is from the memories of Karen Watkins (nee Pendle)

Does anybody else have memories of their time at the village school? If so please contact us

Previous Entry: Murder before Breakfast
Next Entry: A Childs life in Belton