You are here: Home / Belton common at war

Taken from an original text by David Tennant.

My very earliest memory is being told by Peggy Chilvers that the war had started. This occurred when Back Lane, more popular known as Shakey’s Loke, joined Sandy Lane. Assuming this was the 3rd September, 1939 or shortly thereafter. I would have been 4 years and about 1 week old Peggy would have been 3 or so years older than me.

Living where I did, Hill Cottages on Sandy Lane right against the Common, it would not have been long before I became aware of the efforts being expended on the common and thereabouts connected with the war effort. I know that early on troops were billeted in the village, some in the council houses on Sandy Lane. They had quite a large hut likely a cook house beside the institute. The building itself was removed quite early on in the war, but the concrete base remained until well into the 1960’s and maybe beyond then. Right opposite our front gate in the hedgerow between what we knew as the Cow Common and the 16 acre field, both owned by H. R. Dashwood of Caldecott Hall there appeared four gun pits. These were fairly substantial earthworks designed with the business ends of the guns pointing towards the 4 cross ways. The home guard trench situated there must have been right in their sights! They were obviously intended to be semi – permanent as they were fenced off on the Cow Common side to prevent entry from the cattle. They had sand bag walls and shelters on the back side. The Home Guard later took over the one nearest Sandy Lane and installed a Shepherd’s hut there. I understand it was there that the Home Guard stored at least some of their Molotov Cocktails.

On the common itself the most obvious features were a series of trenches which appeared along he crests of small hills. Small in height maybe (about 50 feet), but the outlook from there made it possible to see way out across the marshes towards Acle and Berney Arms. The bright yellow sand which was exposed must have been visible to aircrafts. These days you would have been able to see them from outer space! There were also remnants of earlier trench systems now largely taken over by grass, were these from WWI.

Across the track on the common running from the continuation of Sandy Lane towards Fritton and Marsh Lane and south of the railway was another series of trenches which are shallower, but which zigzagged around a bit. 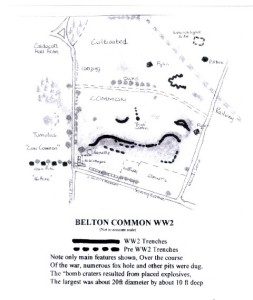 The common and these trenches became our playground for the duration of the war. Play was only interrupted by the appearance of various Army Units which appeared from time – to – time to carry out manoeuvres.

Where these units were based I have no idea, but from time – to – time we would perhaps get a ride in a Bren Gun carrier and cadge a tin of spam fritters from a field kitchen as their training activities frequently lasted more than one day.

The searchlight on Howards Common was also in existence fairly early on in the war. It consisted of a wooden barrack hut, the search light and an AA (anti – aircraft) machine gun. The brick pill box at the same location was also there in the early years. The searchlight unit moved out fairly early on, around 1940 or 1941, as far as I can remember.

In those years the common seemed enormous, although to an adult, I don’t suppose it was much more than two or three hundred acres or so. (if any body knows the true size of Howards common we would like to hear from you)  It is therefore surprising, in retrospect, how much ordnance was used there. I don’t think that the Bren Gun could you blank ammunition, so they certainly used live rounds and fire was usually directed into a bank a few yards away in front of the gun.. We spent many happy hours digging out the lead bullets and collecting the empty cartridge cases. There was also considerable use of 2″ (50mm) and occasionally 3″ (75mm) mortar smoke bombs and various types of hand grenade were also used in abundance. What is also amazing is how much did not go off and was subsequently found by us children. These finds were reported to PC Houghton, but often after poking the offending object with a stick! We would then be asked to take the Bomb Disposal man to the device and on at least a couple of occasions we were allowed to lie in a trench while the object was exploded. Some of the items would be taken away. I wonder how much ordnance is still on the common ?? When I moved into my house in Oulton Broad in February 1966 an unexploded shell from the WWI German Bombardment of Lowestoft was found a couple of gardens away. This was exploded on the rifle range at Pakefield with a fairly substantial bang.

What were frequently found were unused .303 cartridges. Many of the field fence posts in use at the time were recycled timbers from broken up fishing boats. The fastening holes which remained were the perfect diameter to take a blank cartridge, and one of the older boys successfully set off a few after inserting them in the holes and then judiciously using a  hammer and nail. It’s a wonder we all survived !

Can anybody remember when the US Troops arrived in Fritton Warren ? I suspect it was about 1943 but I am not sure. They used the common extensively with much smoke and noise. They also used to “march” along Sandy Lane and on many occasions the carrying of pieces of equipment would result a gift chewing gum or chocolate. I recall trudging along with them to the end of Fritton New Road. Any spoils would be consumed on the home. I assume that they took part in the D – Day Landings. I remember they would have to set up their “pup” tents (made by snapping two ground sheets together. thus each tent accommodates two soldiers) all their kit would be laid out in front of the tents. I assume they were only allowed a certain number of cigarettes, as after the inspection additional cartons would be recovered from their hiding places. Usually a carton sized piece of turf would be removed using a bayonet and the cigarettes buried carefully and the turf replaced. We were also introduced to Lucky Strike and Camels at that time likely, for some setting up a lifetime’s addiction to the dreaded weed!  I remember Miss Hall the Teacher who arrived with the second batch of evacuees from the West Ham, when the V1 offensive commenced and lodged at the “Kings Head” and was often met out of School by one or more American servicemen. Much giggling by us on these occasions!. When they moved out many personal items were disposed of and we children, and adults sought them eagerly. Ralph Middleton found a bingo set and, after we had worked out how to play it, spent much time spent in using it.

The Americans were replaced after a while, I think at Fritton again by a Belgium Unit. All I can recall of their activities was of driving of ambulances through the trenches presumably to simulate off road conditions. They also had a reputation for stealing anything that could be eaten! many claimed to have lost chickens and rabbits.

From time – to – time, POW’s appeared both German and Italian, to perform agricultural work. I recall that the German prisoners made wooden toys to sell and the Italian made shopping baskets from twigs. My mother had one of these. The security seemed quite cursory. A troop of 20 or so prisoners guarded by one soldier with a rifle. To my knowledge nobody escaped or attempted to escape. An ex – German POW, Walter Gehr stayed on after the end of the War and worked for many years at Caldecott Hall Farm.

The Home Guard originally the Local Defence Volunteers (LDV) [Dad’s Army]appeared early on. It was comprised of those too old or too young to be conscripted. My father, Alfred and older brother Eddie slotted into these two categories. It would seem that one’s rank in WWI determined one’s place in the pecking order. Thus H. R. Dashwood Caldecott Hall having been a Major, or maybe a Colonel in WWI, was in command. My father having been a Sergeant took up his old rank again ( Later to become Lieutenant and I think second in command)  all in all very similar to the television programme “Dad’s Army”. 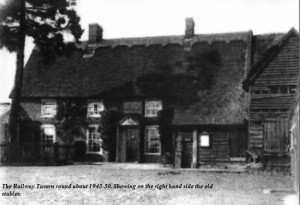 Weapons  in those early days were non existent. Much of the drilling was done with wooden poles due to the non availability of rifles (I recall some was done outside the front of the Railway Tavern public house. (As shown on the left)Later it seemed that the regular army delved into it’s stores and handed on weapons which it no longer had need for or didn’t like very much. Examples of these included the infamous Canadian Ross rifle from WWI which had a reputation for jamming (as shown right)

. These were later replaced with the Lee Enfield .302. I think the Ross may have been .300 calibre. there was also the Browning Automatic Rifle, again I think maybe .300 calibre as it was of American origin. I remember my brother dismantling and reassembling this blindfolded on the kitchen table before he joined the RAF. He was not too pleased when I made the exercise more difficult by removing a piece or two! Other gems included the Smith Gun which was designed to be towable behind a small car (which were few and far between at this time) this was a 3″ smooth bore device mounted on two large diameter disc wheels. To fire it was turned over onto one of the wheels, thus allowing the gun to pivot around the axle. The Northover projector was another this device looked more like a piece of plumbing rather than a weapon, it was designed to throw a hand grenade a couple of hundred yards. The third specialist weapon was the Blacker Bombardment or Spigot Mortar. This was an anti tank weapon designed to launch a fairly substantial finned mortar a hundred yards so vat a tank. There was a concrete base for this in a group of trees adjacent to the back door of Hall Farm on Beccles Road, it may well still be there. Many of these weapons have been described as equally dangerous to the user as well as the person on the other end! the Home Guard also had a small nissen hut on Jimmy Read’s property on Sandy Lane.

There you have it, the likely unreliable memories of a 4  – 10 year old of war time Belton. I have no doubt that others, if still around will be able to also remember the village during this time in our village’s past. The people that I remember are Kenneth (Clicksy) Gray, Ralph (Toddler) Middleton, Albert Pettingill, Michael Guyton, Gordon (Badger) and Ronnie Beare, Ivan Gant, David Claxton, John Dennis, Alan and John Blyth as being of an age around that time. Amongst the girls were my two sisters, Margaret and Kathleen, Eileen and Patricia Nichols, Kathleen Wilson and Peggy Chilvers. Must not forget the evacuee’s from West Ham The Andrews brothers and the Emerson sisters come to mind, I’m sure there were others.

The common has now largely disappeared under a gold course, I wonder if any of the present day golfers are aware of the military activities which took place there in the early 1940’s.

Thanks to David Tennant .