You are here: Home / Sole Survivor

While the majority of the residents of a seaside resort on the Lincolnshire coast were lying snug in their beds, another drama of the war at sea, was being enacted on their shore.

The crew of eight from the undefended “East Dudgeon” lightship machine gunned by and bombed by a German plane were fighting for their lives against the sea and exposure. Only one had sufficient strength to gain shelter and survive the ordeal.

The first intimation we had of the tragedy was the finding, soon after dawn, of a number of bodies lying on the sands. Soon after this, a man was found in an untenanted part of the house, one of the few houses in the vicinity. 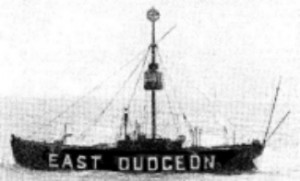 “This was the lightship, which was so ruthlessly attacked by the Nazi bombers in a Heinkel machine. After machine-gunning, the decks to make sure that the crew were unable to put up a retaliatory fire, the Heinkel came back to the lightship and dropped nine bombs, the last of which scored a direct hit”.

“It would be about 9:30am on the Monday morning when we saw the German plane coming from the direction of the English Coast. It was a ’Heinkel.’

“The plans circled round the next thing we knew the crew had opened fire on us with machine guns”.

“Then still circling round, they started to bomb us. The ninth bomb hit the ship and at the same time damaged one of the two ship’s boats”.

“The ship heel over and seemed to go right under. The decks were awash and we were floundering about in water”. One of the crew was ill in his bunk and we had to get him on deck and then we took the small boat”.

“Although badly knocked about, the ship remained floating. The plane circled round, but dropped no more bombs. We started rowing shore-wards as there was no other ship in sight”.

“We still continued to row after darkness had set in and it was about two o’clock in the morning when we heard the sound of waves breaking the shore. We dropped anchor and it was then that the waves capsized the boat”.

“I am a good swimmer but realized it was useless to attempt to swim in my heavy clothes. I turned on my back and hoped for the best”.

“Soon I found I was in calmer water and, on turning over discovered it was like a shallow pond. I must have remained on my hands and knees in that water for about 10 minutes until I had regained some strength, and then I crawled ashore.” 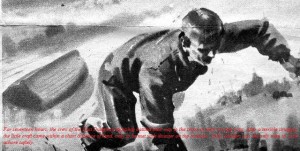 For seventeen hours, the crew of the East Dudgeon lightship battled their way to the shore in their rowing boat. After a terrible struggle, the little craft came within a short distance, of land only to meet with disaster on the breakers. John Sanders was the only man to swim ashore safely.

I had heard one of my mates shouting as the waves carried him ahead of me, but in the darkness I could not find any of them.”

Naturally, after all that time in an open boat and now the added shock of the icy water and clothes drenched through, he was not sure of the period of time which elapsed through the next stage of his adventure.

Fortunately, for him, he commenced to walk in the right direction, for if he had gone the other way he would have been unable to find shelter, and would have quite possibly suffered the same fate as his comrades.

Safe home after his terrible ordeal on the bombed “East Dudgeon” lightship, John James Sanders, the sole survivor of the crew of seven, rests after his seventeen hours in a small boat. His eyes are almost closed with fatigue while his hands were so severely numbed that his fingers had lost all sense of feel. 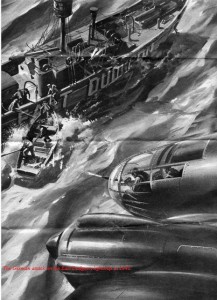