You are here: Home / Belton book

In January 1992 – just a mere two weeks after its publication a book on the history of Belton has already sold more than two hundred copies. Such a demand from the people who want to read about the Suffolk village in the days before it was annexed by Norfolk and became a dormitory for Gt. Yarmouth.

The author, Dorothy Smith then 88 is one person who regrets the change. She is a descendant of he Farman family which lived in the village for five generations, but her book is less of a history and more of a record of Belton as it was when she was a child.

When she retired Miss Smith returned to the village after spending most of the working life in Gorleston, but she found that the village had changed virtually beyond recognition. It was this which prompted her to write her book in 1991 and to preserve the memories of a bygone age before they were lost forever.

Miss Smith approached Sir John Mills, one of Belton’s most famous former residents who attended the village school, and he agreed to write the foreword for the book. Miss Smith also enlisted the help of another resident of Belton Mrs Enid Cox who edited the book.

Miss Smith who was the organist at the village church during World War II, then set about describing each street in turn as she remembered it as well as recounting tales of the people who lived there. The book is not based entirely on her memory, and she said that while local people had helped with photographs, Gt. Yarmouth and Lowestoft libraries had provided many of the detailed maps  which the book includes.

The proceeds from the book went towards helping the terminally – ill 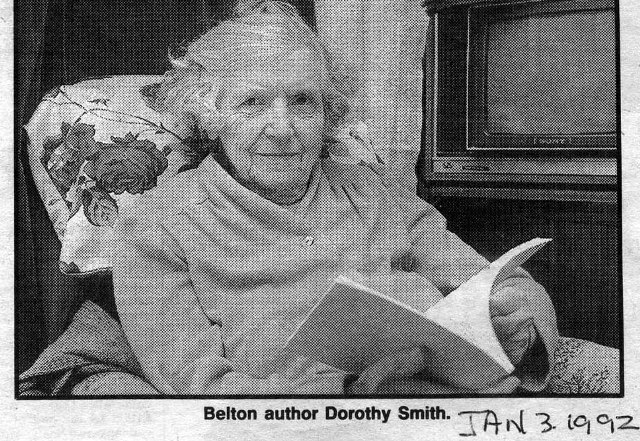 Belton author Miss Dorothy Smith with her book in 1992