You are here: Home / The wedding of Charles William Kirk to Miss Sarah E. Sharman 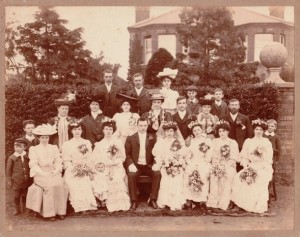 The wedding of Mr Charles william Kirk & Miss Sarah E. Sharman. Which took place in All Saints Church on Monday 17th June,1912.
We thank Mrs Rosemary Bromley (nee Kirk) for this photograph.
The young girl standing on the left is Hilda Gladys Sharman
Seated left to right are Charles William Kirk (groom), Sarah Elizabeth Sharman (bride), George Sharman, Harriet Sharman (nee Beckett), the brides parents and standing Dorothy Irene Sharman.
Standing behind centre are Lilian Harriet Sharman and to the right Winifred Evelyn Sharman.
Small boy seated is Frank Sharman.
I cannot identify the others in the photos but this I presume was taken in the front of Jessamine House which was George and Harriet’s home in Belton.

The contracting parties were Miss Sarah. E. Sharman (Sybil), the second daughter of Mr and Mrs George Sharman, Jessamine House, Belton, and Mr Charles William Kirk, eldest son of Mr and Mrs John Henry Kirk, of Eastleigh. Wymondham. The service was fully choral, a large number of relatives and friends being present to witness the ceremony, both being well known in their respective villages. The bride who was most charmingly attired, was given away by her father, Mr. G. Sharman. She carried a lovely bouquet, the gift for the bridegroom, and was attended by her two sisters, Miss Lilly and Miss Winnie Sharman, as bridesmaids. Each carried an ivory – bound prayer book also the gift for the bridegroom. Mr James Sharman brother of the groom acted as best man. As the happy couple left the Church they were greeted with showers of confetti and rice, and guns were fired at intervals. A reception was held at the bride’s home, where a large of friends sat down to the wedding breakfast. Many telegrams of congratulations were received. They were also the recipients of many useful and costly presents. During the afternoon, the happy couple left amidst the hearty congratulations of their numerous friends, and were driven to the Beech Station, en route for the Norfolk Broads, where the honeymoon is being spent. Afterwards they will take up their residence at Southtown, Great Yarmouth.

? – Mrs Lipscombe (grandmother) – I have Mother’s maiden name as Arnold

Is Mrs Lipscombe – a great Aunt