You are here: Home / A sweep as lucky as could be

A sweep as lucky as could be 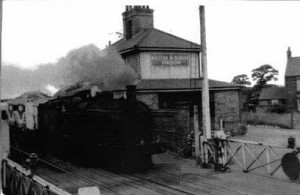 The former Belton railway station photographed here in 1961, about 400yards from the spot where in 1889 a young woman was killed be a train

Over fifty years ago, as chimney sweep retired in the London Borough of Harrow, saddening his many customers who regarded him more as a friend. They missed his sunny, happy – go – lucky approach to life that had been his disposition from an early age.

That man, who died aged 88 more than a quarter – of – a – century ago, had every reason to be glad to be alive, for he was born in the most distressing and bizarre circumstances. Indeed the official birth certificate of Reginald Hubert Burrage recorded his place of birth in 1889 as “On the Great Eastern Railway”.

One night 22 year old Rose Selina Burrage failed to return to her Burgh Castle home, where she kept house to her widower father, Horatio, a market garden labourer. He was not unduly alarmed thinking that she might have gone to Great Yarmouth. He was unaware that she was pregnant. Next morning a plate layer Jacob Saul walked along the Beccles – Great Yarmouth line on his way to work at Belton, he chanced upon a woman’s body by the track. The woman was fully dressed save for her hat, which was 20 Yards distant, and feared that she had been struck by the 03:25 mail train from Beccles. “Just as I was about to move the body I heard a child’s cry” he told the inquest on Rose! Shocked  and not knowing what else to do, he hurried the quarter – of – a – mile to Belton station to report it. Because the man who the body heard the cry  of a baby Burgh Castle widow Elizabeth Beckett, a practising midwife, hurried along the line to the scene and examined the as yet unidentified body. “I found under her a newly – born male child which was enveloped in her underclothing and was not separated from her” she said in evidence. according to a Great Yarmouth Gazette report Mrs Beckett  “did what she considered necessary”, and the child was then living.

A Gorleston doctor John Bately described Rose’s severe head and leg injuries and thought she would have been knocked insensible by the blow to the head and had died in about half – an – hour. He declared to the hushed hearing. “I would imagine the child was born while she was in that insensible state during the process of death. It was a full – timed, full – sized and full – grown baby”. The pain of her labour and her mental gloom would be quite sufficient to account for wandering away and make her not responsible for her actions. A verdict of “suicide” while in a state of temporary insanity was recorded by the coroner on poor Rose.

One cannot help but wonder how the baby managed to breath for perhaps two or three hours, if it was smothered under his mothers clothing, but survive it did. No mention was made in the press report of the possible identity of the baby’s fathers, although there were two men in Rose’s life. She was engaged to Jethro Baker, a railway porter at Geldeston station on the same line, but the coroner was told that he had not seen her for six months. And Henry Bottoms, an ostler at Belton Kings Head, gave evidence that he occasionally walked out with her, but was not engaged to her and had known for a fortnight she was pregnant – but that two days earlier she was not in low spirits and they had not fallen out.

it seems that the orphaned infant was destined to spend his formative years in institutuins, butthe good fortune that was to stay with Reginald Burrage for nearly nine decades was quickly evident when he was taken in by a Mrs Platford, who felt such love for the mite that she was determined to keep him.

Another Burgh Castle resident Mr William Porter wrote to the Gazette “I feel sure it could not be better cared for than where it is and I do not think there is any one else that has any desire to take it.  He did not think Mr and Mrs Platford’s reward ought to be entirely from Heaven, as it were, but needed to be on Earth and more material and immediate because these were hard – working folk. The foster father was a farm labourer and his wife would have  to devoteher time to the baby’s care.

In Christian England, I’m sure there are a great many people  who would like to give something for this little one under these  very painful circumstances” he continued Major Coomb and his wife were already soliciting subscriptions to a fund and he hoped Gazette readers would give generously. In the 1970’s I spoke to Violet Palfreyman from Essex one of the Platford’s grandchildren, who told me. They also had five children of their own, and raised Uncle Reg as one of their own although he was no relation. When you hear today of those adoptions, and children being put into care and all paid for, it is wonderful how in those days this baby was taken in and brought up as one of the family.

There was no adoption, but my grandfather must have had some (financial) help from someone because my grandfather was only a farm worker – on the plough. Uncle Reg was a man who could not care less in life and he was always happy – go – lucky. If ever a saying “A cat with nine lives ” applied to anybody it was to him. “He came into this world with nothing and left with nothin”. Reg Burrage went to sea at 11 having passed a trade examination ment for lads of 14, and back onshore worked in a shop and as a bus conductor in London, meeting his future wife Violet on the No:17 route from Acton to London Bridge – she was a barmaid were the bus turned around.

He joned the Royal Navy in 1915 and fought in the Battle of Jutland in the First World War.

Moving to Harrow in 1932 he turned to window cleaning and then to chimney sweeping and after retiring he took a part – time job at an American base then sold hot dogs at a former cinema.